Secretary of the All India Progressive Women’s Association, Kavita Krishnan, speaks here.
Unrelenting and extremely stirring articulation of what many of us are feeling right now.

Also, not going viral in India is this: Arundhati Roy speaks.
Surfaced at 7:51 AM No comments:

This year I've packed a lot of suitcases because of work (no I don't work for a movers & packers company ha ha).
I've become quite adept at it now.

But this suitcase - it's quite another thing.
No sensible shoes. Two pairs of heels, one pair of boots and bright red sneakers.
No functional shampoo-cum-soap. Three types of hair products and a hair dryer.
I'm ditching my 'outdoor location' pants that have been through unimaginable, pan-Indian trouser trauma. The tight-tight jeans and skirts are in.
No serious kurtis packed for meetings. There's a special corner in the suitcase for my disco-ball, sequined, swishy top.
And SO MUCH make-up and dangly earrings.
No laptop bag full of research materials and power-point presentations. Just Steinbeck and a trashy magazine.
I'm finally going to listen to that loooooong podcast that's been slow-basting in my Ipod.

In what seems like an eternity, I'm finally going on vacation.

Between Knowing and Unknowing

Tonight's (18th December) 'India Decides @ 9' on NDTV has been very interesting.
I highly recommend watching it once it's uploaded to the website. (Also, catch today's parliament proceedings if you can. I was riveted.)

When it comes to rape & India, anger, outrage and a deep sense of violation is pervasive.

But what stands out is the general state of confusion, how little we understand about violent crimes against women and how schizophrenic we are when it comes to codes of conduct between the two sexes.

Things are simpler on international news channels like BBC World News, where the (Indian) reporter points out the irony of a burgeoning economy like India simultaneously treating its women with such disrespect. The report seems to pivot on the assumption that women are actually valuable and that a high incidence of crime against them speaks of an ailing society.
It does what no Indian channel does: air an interview of a Delhi citizen who breaks down while talking about being groped in a DTC bus and describing it as the 'worst moment' of her life.

I wonder if this type of shaming of India on a global scale will have an impact: to be disqualified from being a world player until we stop saying that rape is caused by Chinese noodles.

I won't lie. There's a part of me that would be very gleeful if that happened. Not gleeful...maybe just relieved that it's all out in the open now.

For some strange reason, I keep rewinding to 7-10 years ago, when Delhi's traffic system was transitioning from just another chaotic urban mess of inadequate roadways, boorish driving culture and a shocking disregard for the lives of not just others on the road but one's own safety. Then, very slowly - but perceptibly - things began to change. Things began to change in this 'north-Indian, immigrant infested' corrupt metropolis that everyone had associated with a deep-rooted aversion to order.

First, the government started to get serious about building decent roadways, immense flyovers and wider pavements. They started building the metro. Even before that they instituted the seat-belt law. I remember when that happened. We scoffed: "That'll never work. Can you imagine a Delhi cab driver wearing a seat belt? Who do we think we are? White people?" But then the thing took on a life of its own. Because at every street corner, there was a cop waiting to challan your ass if you didn't. Rinse & repeat with helmets, pollution checks, speeding.

I'm not saying Delhi's traffic has done a 180. Nothing as drastic as all that. But there's been a tangible transition effected by strict implementation of smart policy. And now most drivers in Delhi automatically strap on their belts when they get into a car. I'm not sure if most of us are doing it out of any deeper sense of our safety - we just don't want to get pulled over by a thulla.

The other day I returned to Delhi after a week in Hyderabad. It had been an intense week of being stuck in the most bizarre traffic situations I've ever been in. People rushing red lights right from under a cop's nose, drivers driving on the wrong side of the road as a matter of course, helmetless two-wheeler riders with death wishes and pointless traffic jams created just because people won't stick to the rules. Yes, the same stuff happens in Delhi too. But over the last decade, it's gotten much better. Now it's a relief to return home from cities like Hyderabad, Bangalore, Mumbai & Kolkata etc. & go for a drive here. Somehow the city's managed something even the widest eyed idealist had been cynical about.

I'm not saying there's a direct comparison between Delhi's traffic & its culture of violence - especially involving women. But there's a lesson here of some sort, isn't there?

I live in a city where, everyday, I walk through crowds of men not knowing how many of them could be criminals.
A Could-Be-Criminal, who might never become aware that his desire to attack with brutality is even a crime. Whose brothers, sisters, mother, father, wife, lovers, friends, neighbours, local politicians and policemen might never realise that his actions are unlawful, inhuman or savage.

I live in a city, where I must assume that I will be raped.
I live in a country, where I am expected to feel grateful if I manage to live out the rest of my days unmolested.
Surfaced at 10:12 PM No comments:

Went for the South Asian Bands Festival at Purana Qila this evening.
A special event organized by the Ministry of External Affairs, Government of India, bringing together musicians from all the SAARC countries. 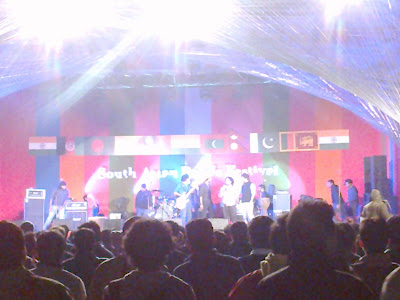 Call me paranoid but there's something ominous about so many Indian flags gheraoing the other SAARC countries' flags.

Maybe I'm over-reacting. I mean, we aren't such bullies are we? ARE WE, BITCH?

Speaking of bullies: 2011's highlights showcased a superb heavy metal band from Myanmar. You have to wonder what they're rebelling against. I mean, Than Shwe did let them out of the country, didn't he?

And then there was this band from Mumbai going to town about smoking ganja, while the Hon'ble Minister for External Affairs sat in the audience, pondering which one of his babus sanctioned a band that yells "Blow YOURSELF UP!!!!" every 6 seconds.

Finally there was Noori from Pakistan. They are gorgeous, they did a kickass version of 'Eik Alif' without Saeen Zahoor and therefore no amount of cynicism will allow me to diss them.
Not even Ali Hamza, who seems to have the same stylist as Ajmal Kasab.


Oh Hamza, you crazy coot you....reminding us how much India & Pakistan have in common.
If only we'd all just get along.

Email ThisBlogThis!Share to TwitterShare to FacebookShare to Pinterest
Labels: Politics

My Father's Thoughts On FDI

My Father: "Will Sushma Swaraj care about the poor farmer's sister's wedding?" 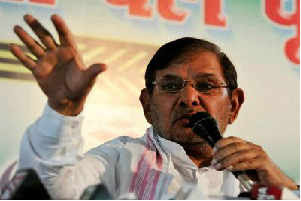 Sharad Yadav: "How will a man on a cycle go to Tesco?"

If this floats your boat...

...Then do visit my music blog 'And Your Bird Can Sing'.
Thank you for swimming through these waters. I know they can be treacherous at times.
:)